this could almost be funny...it kind of looks like a hair-do. pieces pulled right out of the carbon (it's stuck on). 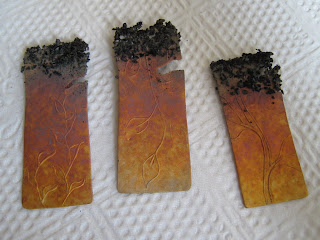 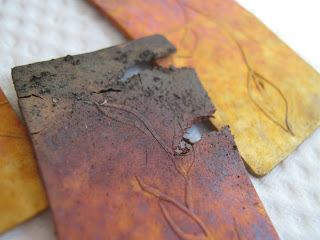 bronzclay pieces after a vigorous rubbing-off of carbon.
i'm not exactly sure what went wrong, although i suspect it has something to do with carelessness. so, here's what i did....i wiggled the pieces vertically into the activated carbon and didn't worry that they were sticking out a bit for the phase 1 firing that just burns off the binder. after phase 1, i filled the steel container with the rest of my carbon, but noticed that it was just covering the tops of these babies, so i poured in some brand-new, fresh carbon. capped up the container and fired phase 2. the hair-do part at the top is the layer of new carbon. i think i remember something about fire the carbon once by itself before you fire any bronze in it...i suspect that's where i went wrong. and i just started feeling comfortable with the darn bronzclay. back to the old drawing board!
on the bright side, this gives me an opportunity to condition the new bronzclay with olive oil, a la celie, to see if that really makes it less sticky.
Posted by holly kellogg at 10:22 PM

Aargh! Scare-do! They're kind of fun looking, though.

What size is your steel container? I'm hoping to start some bronze and copper projects today....
xoxo

well, tiny, actually. i got it at a kitchen supply place...it's a spice container...maybe 4 inches tall and 2 across....do you think that might have something to do with it?
have fun in the studio!
xoxo