over the course of the last few months i have been working (in tiny dribs and drabs) on an IDEA. obviously i thought it was a pretty good one, since the precious few minutes i'd get, i spent on this one idea. it started when i was at the workshop at celie fago's in september...i was inspired by EVERYTHING she taught, but what really caught my eye was the teeny, tiny textured tube beads she made as bails for really elaborate bezel settings. i thought "how hard could they be?"...famous last words.it's not that hard to make them, it's just really hard to make them look GOOD. 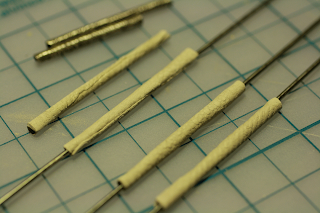 i made a few and i got this IDEA in my head about ladders (as a symbol). ascending and decending. and destinations. my idea was that those tube beads would make great ladder rungs. well i suppose, in theory, they eventually will.

here's the first one. i really hoped it was going to be great, but instead....

and kinda wonky.
now don't get me wrong, i'm not out of hope...i'm pretty sure i have a reasonably good idea about how to string this one with it's missing rung and have it still look darn good.
and the rung? 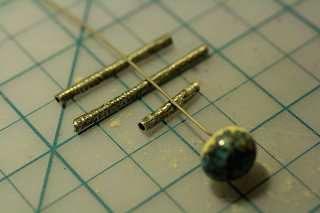 i think it looks like it has potential to look good with it's brothers and sisters in support of one of kelley wenzel's beautiful, handmade headpins.
i think the ladder IDEA is one worth pursuing, unfortunately it looks like it will have to be at a very slow pace this year....
Posted by holly kellogg at 9:12 PM

Woah, Holly! I think the ladder looks pretty interesting. Couldn't you just put some kind of a burnisher, maybe a steel knitting needle, and wind it around in the edge of the ladder rung to gently spread it out a little bit? It would be like a tube rivet. I don't mean hammer it, but it seems if the fit is close anyway, you could find a way to flare the ends just enough to hold them in place without changing the look.
Just a thought. We're off to have dinner with friends in Ellsworth and them home tomorrow to host a birthday dinner for Bruce's mom.
Everyone is getting sourdough bread!

well, i hadn't thought of that...the problem is that the one that fell out has an opening much larger than the rest ALREADY...hmmm...i wonder if the tiny pearls i have planned for going up the sides of the ladder would camouflage that...
have fun in ellsworth and with bruce's mom!